Atteridgeville is a township located to the west of Pretoria, South Africa. It is bordered to the east of Saulsville, to the west of Proclamation Hill; to the north of Laudium and to the south of Lotus Gardens. The settlement was established in 1939, and is named after Mrs MP Atteridge, chairwoman of the Committee for Non-European Affairs on the Pretoria City Council at the time. The Lucas Masterpieces Moripe Stadium is located in Atteridgeville.

Atteridgeville was established by the government in 1939[3] as a settlement for black people by the government, after much lobbying by Mrs Myrtle Patricia Atteridge, the chairwoman of the Committee for Non-European Affairs on the City Council at that time. Atteridgeville was established nine years prior to the voting in of the apartheid government in 1948. The first occupants were moved to Atteridgeville from Marabastad on 26 May 1940. It was officially opened on 5 August 1940. Mrs Atteridge, who was also a philanthropist, Black Sash activist and the deputy mayoress of Pretoria, endeavoured to improve living conditions of black people who were previously living in squalid conditions in Marabastad. Atteridgeville provided amenities such as brick housing, lighting and toilets, and later, so as to further enhance living standards, the township was connected by train to Pretoria CBD. Schools, creches and clinics were established thereafter. The naming of the township was in fact suggested by the black people themselves who also requested Mrs Atteridge to represent them in parliament which she refused as she was disinclined to participate in an exclusionary regime. Between 1940 and 1949 more than 1500 houses were built for people relocated from Marabastad, Bantule and other areas around Pretoria.

Development was frozen between 1968 and 1978 in accordance with the government’s policy that housing provided for black people be limited to the homelands. In 1984, Atteridgeville was granted municipal status.

1984 saw school boycotts and general unrest when demands by the Congress of South African Students to implement democratic Students’ Representative Councils in schools were rejected by the Department of Education and Training. The first victim of the school boycotts was Emma Sathekge from David Helen Peta High School. The schools were suspended for the better part of 1984 and exams were not written by all High school learners.[9][10]

On 15 April 1988 a bomb explosion caused damage to the Atteridgeville Municipal buildings; no-one was injured during the attack. The attack was planned by Umkhonto we Sizwe and executed by one of their members, Johannes Maleka. In November 2000, Johannes Maleka was granted amnesty for his part in the attack by the Truth and Reconciliation Commission. Atteridgeville is the only township in Gauteng that blocked Zulu-land migrants from forcefully occupying Hostels, prominent members of the ANC in the township including Dr Abe Nkomo, Mr Rami Dau, Reeves Mabitsi and Kgomotso Mokoka held the forefront.

Atteridgeville is a diverse township, the residents of which speak many languages. According to the 2011 census, the most commonly spoken language is Northern Sotho, followed by Tswana and Sesotho. A mixture of languages such as Afrikaans, Setswana, English and Sesotho are sometimes fused together to form what is now a unique language style of the township with a slight inclination to slang known as tsotsitaal. 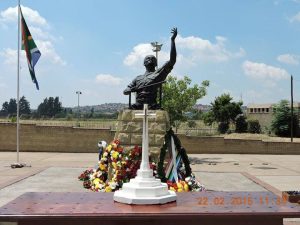 The Mendi Memorial is a war memorial dedicated to over 600 black South African soldiers who died when the British SS Mendi sank after a tragic collision in 1917, during the First World War. The memorial was unveiled on 24 March 1996. The memorial consist of the upper half of a soldier holding onto a ships railing with the other hand extended towards the sky.

The memorial is located at the ‘Gamothaga Resort ‘on the corner of Pitse and Tlou Streets.