According to the event’s founding member, Ms. Tiny “Sister T” Mashiloane this is simply to thank the continued support, loyalty and love the people have shown the event since its inception. Mashiloane added that those selling food have to however produce a certified operating health certificate. She further said that they will ensure that when hiring help and for the event they will priorities locals first. Speaking during the media launch Mashiloane added that the lineup will also consist of at list 50 percent Gauteng artist in order to promote and better home grown talent. 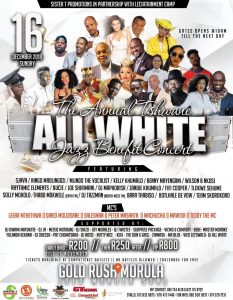 Hosted annually at the Goldrush@ Morula Casino (formerly known as Morula Casino in Mabopane, City of Tshwane) on the day of Reconciliation, “The All whites” as it is affectionally known by its legions of jazz fanatics has enjoyed years of success and support by revellers from various walks of life. This year’s line-up consists of fresher and matured line-up of top Mzansi talent, legendary afro pop artists Ringo, Kelly khumalo, Bucie , Tlokwe Sehume and Rhythmic Elements are some of the matured talent that will share the stage with new kids on the block such as chart topping Mlindo The Vocalist, Sjava, Zandie Khumalo, Idols runner up Botlhale The Vow and Surprise Package just to but a few.

Gospel artist, Solly Moholo, Xitsonga music hit makers, Benny Mayingane and Joe Shirimane are set to leave revellers smiling from ear to ear performing some of the hits they are known for. Founded by businesswoman Ms. Tiny “Sister T” Mashiloane of Mabopane, “The All Whites” were initially hosted annually for a period of five years at the Oberon Resort, Hartebeesport and due to public request to have the event brought to the nearby townships of Tshwane North the Jazz and Soul Benefit concert later found a home in Mabopane at Goldrush@Morula.

Mashiloane concluded that she was excited by this year’s line-up as it affords revellers the opportunity to enjoy something new with a bit of a matured taste. “The reason we opted mix legendary artists with new kids on the block was simply so to balance the shows different target markets of young and old fans. “We are more than a jazz and soul concert but an institution committed to give our fans more than just a show but also a platform to improve their everyday lives. We have opened our doors to all local businesses people who would like to sell food, clothes, accessories at the event to come and make business”, concluded Mashiloane. Tickets are available at computicket.

A MERRY CHRISTMAS FOR THE ORPHANS.

ALL WHITE FOR THE PEOPLE.