Bridget Makhubela, also known to many as 3RIDGY is a versatile visual artist involved in painting, drawing, 3D design and graphic design. She is a rare breed and the future of female artists in Pitori(Pretoria).  She was born in Boksburg and bred in Mamelodi, she was only 3 years old when she moved to Mamelodi. Bridget grew in an active artists’ family, her passion for art started when her uncle exposed her to visual art in 1999. As young as she was, she fell in love with art. In 2012, when she was doing grade 12, Bridget started attending art classes as part of her extra mural activity. In 2013, she enrolled for a diploma in arts and design at Tshwane North College. Bridget describes her work as a form of an eye opener to the beauty that is in and around us. “Art speaks in a language that transcends any racial and cultural barrier joining the world as one”- Bridget.

Bridget uses one dot to express lines forming geometric figures (shapes), texture and value. She emphasizes on detail and she uses topographical spaces of colours to create the analogous emotions and contrast value to give illusion of a 3D by use of different mediums. She said some of her inspirations are derived from the most popular art movement such as surrealism. Bridget was a curator for the roots echoes chapter 2 art exhibition that was held at South African State Theatre (SAST) under an incubator programme. In 2013, Bridget’s work was exhibited at an art exhibition event hosted by Jafta Mathunyane. In 2014 her paintings were also exhibited at the Social Market. Her work, alongside with other groups was again exhibited at Tshwane North College (Pretoria campus) hosted by 06 Art Vision. “I have been fortunate enough to work with great institutions and individuals in my young career and I am excited to find out what the future holds for me”, said Bridget. 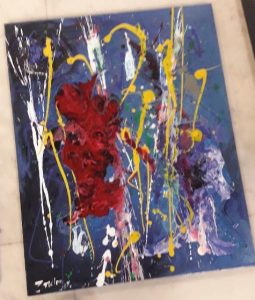 She has worked with ReDe5ners, Moving Contemporary Art World in association with SBUY Anda Consulting Business And Project. She also had a group exhibition where she exhibited her paintings at a career expo that was hosted by POE at Hammanskraal in 2015. She further attended a career expo at Nazareth hosted by Department of Education and Training. In 2017 Bridget was with Red Bull Amaphiko Academy where she was designing and painting mural cutlery chandelier, wall treatment photo frames for bathrooms, floor lamp and table lamps. 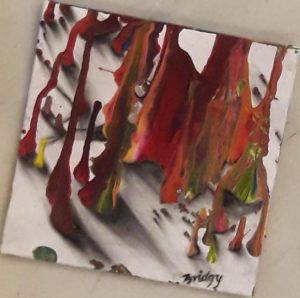 In 2017 she had her first solo exhibition at SAST that was under incubator programme. She joined an internship programme with a company called MK Investments were she was focusing on doing 3D designing and graphic designing for them.  “Art is more than just talent one needs to imagine and think beyond the norm and express messages that create spiritual connections”- Bridget. She has ambitions to see her name as one amongst aspiring young woman in visual arts. “My work comes from a deep place and I make sure that every time I step in front of that canvas, or work on any other project I give my best and always strive to tell a story”- Bridget.

TIPS ON HOW TO BE A GOOD PHOTOGRAPHER.