Today we talk about yet another great township in Pretoria, but this one is one that carries within it a precious gem which is a piece of our country’s history. At first glance one wouldn’t think that it carries so much treasure in terms of buried memories and stories of a trying time in our land. A time of war in an attempt to achieve peace, a time of true trials and tribulations for black people. This place is another underdog in terms of historical sites but it is a huge part of our history, a living time capsule. I am talking about none other than Atteridgeville.

According to Wikipedia the history of how Atteridgeville came about is one of the very few we hear in terms of partnerships between whites and blacks in the days of the struggle. One white woman stood firm in fighting for black people to have better living conditions and all that resulted in the building of the community.

History: Atteridgeville was established by the government in 1939 as a settlement for black people by the government, after much protesting by Mrs Patricia Atteridge who was the chairwoman of Non- European affairs on the city council at the time. Atteridgeville was established nine years prior to the voting in of the apartheid government in 1948. The first occupants were moved from Marabastad on the 26th of May 1940. Mrs Atteridge who was also a philanthropist, black sash activist and the deputy mayoress of Pretoria, attempted to improve the living conditions of all black people who were previously living under very dirty and unpleasant conditions in Marabastad. Atteridgeville provided amenities such as brick housing, lighting and toilets, later so as to living standards the township was connected by train to Pretoria CBD. Schools, creche and clinics were established thereafter. 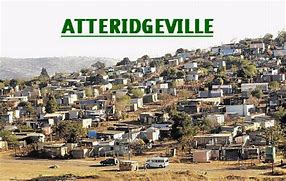 The naming of the township was in fact suggested by blacks themselves who also requested that Mrs Atteridge represent them in parliament which she refused because she was reluctant to participate in an exclusionary regime. Between 1946 and 1949 more than 1500 houses were built for people relocated from Marabastad, Bantule and other areas around Pretoria.

Although the establishment of Atteridgeville was under good intentions it wasn’t spared the troubles of the hard times that hit our country. The 1984 school boycotts and general unrest when demands by the Congress of South African Students to implement democratic representative councils in schools were rejected by the Department of Education and Training. The schools were suspended for the better part of 1984 and exams were not written by all high school learners.

Today Atteridgeville stands to be one of the most relaxed townships in Pretoria, with a vibe that cannot be copied it has various places where people come together to enjoy a simple beer or meat on the grill, there is history in each brick, every house that stands there today has a story to tell. A story of building a community from the ashes of our struggles. It was once a war zone with all individuals fighting the good fight. It’s safe to say Pretoria has its own version of Soweto.

Check Also
Close
Search Places
Weather
Gauteng
Scattered Clouds
23 ℃
24º - 15º
66%
3.13 km/h
23℃
Mon
18℃
Tue
20℃
Wed
16℃
Thu
20℃
Fri
Follow Us
Facebook Twitter WhatsApp Telegram Viber
Back to top button
Close
Popular Posts
Most Commented
Recent Comments
We use cookies on our website to give you the most relevant experience by remembering your preferences and repeat visits. By clicking “Accept All”, you consent to the use of ALL the cookies. However, you may visit "Cookie Settings" to provide a controlled consent.
Cookie SettingsAccept All
Manage consent