I swear the world needs more people like Gilton who are able to inspire and change the lives of many by just delivering a message of hope and inspiration. One thing that makes Gilton not to give up is his passion; he has passion running through his veins. You can see it and even feel it in every speech that he gives. He lives for this; he is intense, inspirational and loved by many.

Gilton Mhlanga well known by Gilton Vocab was born in Soshanguve block V in November 1989. He was born to the comfort of both parents but later on, he lost his father, lucky enough his community was there and they raised him as one of their own. Gilton is an entertainer, community builder and gifted motivational speaker who aims to deliver a powerful message that will excite and inspire his audience.

Gilton is nothing but a fun and loving speaker with other talents including being a song writer, composer, and entrepreneur and runs a stable called Vocab Records which he strives to uplift his community through it. “I am my community and I am nothing without it therefore my aim is to build it and help wherever I can with everything that I have got which includes using Vocab Records to inspire others as well as unprivileged youth”, said Gilton.

Gilton discovered his talent back in primary school where he would win all kinds of debates and was rewarded by being appointed as the director of all debate shows and stand in. While growing up his home had a sitting room consisting of furniture that was packed with all kinds of books, CDs and DVDs. Gilton loved reading and it made him stick around his mother’s sitting room even when his peers where busy on the streets. He was a rare breed. 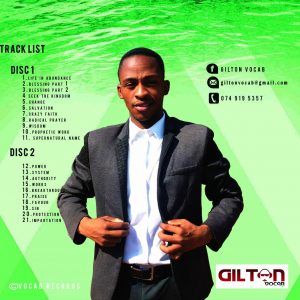 When he was in high school, he was passionate about what he was doing to an extent that he even formed the speaking crew that scored him local fame and was booked for local gigs that took place around lodges and hotels. From then he knew that he was gifted and someday he would become one of the best, reach the likes of Eric Thomas, and be one of those people who have the power to make a real and positive difference in the world.’’ I have that burning desire to inspire others to grow, develop and improve their life’s and if granted a chance I will definitely do it’’, said Gilton.

Gilton is also a very talented singer and his melodic voice does nothing but inspire and change you forever as it consists of songs like power, salvation and other inspiring songs. His album called Legacy is a very motivational album that aims to inspire and change his community as its youth are subject to peer pressure and everything that comes with it. This album is for everyone as it also praises the lives of entrepreneurs, community leaders and everyone else who is trying to make ends meet at the end of the day. Gilton is taking the world by storm and has formed a movement called Billionaires Club that you can also join. “I’m really honoured and in the near future I will be shooting the video promo for my business conference and support is what I’m seeking”, said Gilton.

The album is already out and you can contact Gilton at giltonvocab@gmail.com for any enquiries.