POWER OF THE TONGUE WITH MIZ BROTHER.

They call it the information era no wonder the 21st century has seen more youth voicing their thoughts than ever, I guess there’s a lot to be said. Dineo Sepato otherwise known as “Miz Brother” is a 29 years old hip hop artist with a mouthful of thoughts to share with her fans and music lovers. The talented aspiring artist was born and raised by a single mother in a township called Mamelodi in Pretoria. “My musical journey stems from my enjoyment of poetry, it was through inspiration from various artists that I started turning my poems into music”- Miz Brother.

Miz Brother attended her primary schooling at Roman Catholic Aftercare before moving to Mangolwane Primary School and eventually completed her high schooling at VKM High School. Her musical journey began like many others, in a bedroom studio of a friend by the name of Skrypta Knight who encouraged her to start writing her own lyrics and make music out of them. After sometime developing her craft Miz Brother was introduced to Wilfred B. Mothwa also known by Auth3ntic Founder and Director of AMPli’s Records Production and got signed in the year 2008.

“The highlight of my career has to be, the many souls that are touched through my music. As I perform, it is quite comforting yet flabbergasting to see how my music can make people tear up and how they actually relate to it”, said Miz Brother. 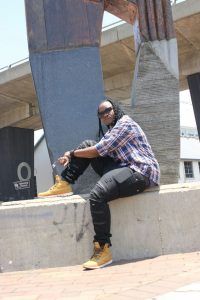 Like with every aspiring artist the task to getting the recognition they deserve is a daunting one, it hasn’t always been easy for Miz Brother. ”I want to prove a point because female MC’s are not given much credit and are underestimated and the fact that I am who I am which is lesbian, the industry finds it hard to accept” – Miz Brother. This is a battle she continues to fight and her commitment remains unshaken and that keeps her going.

“I work hard every time, all day, and every day. I bring my A game and always tell myself there is always somebody out there better than me. The reason for that is because I want to improve, I want to be recognised, I want to motivate others, I use that as motivation to be on top at all times. My passion for music drives me. In addition, my team that believes in me adds to the energy to fight through and keep going”, said Miz Brother.

Miz Brother has released her debut EP called “The B.R.O EP” which can be streamed online and you can personally contact her and the stable she is signed under for a copy. “My short-term goals are touching base with as many cities as possible, and growing a fan base. Thereafter spreading my music to the masses like TV, radio and the rest of the world of entertainment”- Miz Brother.

The talented artist surely has great plans for the future and you can stay in touch with her through all social media platforms under the handle @MizBrother and also stay in touch through the stable she is signed under AMPlis Records on social networks.