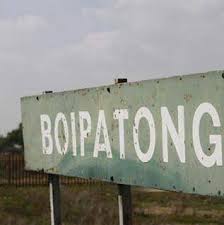 Boipatong Vanderbijlpark is a township , Gauteng, South Africa. It was established in 1955 to house black residents who worked in Vanderbijlpark and Vereeniging.

Boipatong means “the place of hiding” in the Sesotho language. Boipaong’s expansion is in tandem with the growth of Afrikaner Nationalism and the South African discrimination policy called apartheid.

Boipatong along with other surrounding townships was a pool of cheap labour for the steel industry, ISCOR. ISCOR was built mainly as part of job creation and poverty eradication for the white working class. Although small it was one of the places where the anger of the black people was felt during the marches of the 1960s against the carrying of passes.

It was the site of the infamous Boipatong massacre on 17 June 1992, when 46 township residents were massacred by local hostel-dwellers. This happened at a time when Convention for a Democratic South Africa (CODESA) negotiations towards the end of apartheid in South Africa were in progress. Boipatong massacre was one of the reasons that led to the suspension of the talks. The African National Congress (ANC) National Working Committee released a statement that they could not negotiate in condition where majority of the poor were killed in a state sponsored violence. They subsequently withdrew from the talks only to return after the then-State President FW De Klerk committed to controlling his security forces. This was the second year after the release of Nelson Mandela. This event was attended by 228 delegates from 19 political parties. On further investigation and revelation from the Truth and Reconciliation Commission(TRC) this massacre was confirmed to be state-sponsored. The hostel dwellers who killed the residents were Inkatha Freedom Party (IFP) members who later confessed in the TRC they were transported by government police cars and led by white police officers who painted their faces black.

This massacre is added in the lawsuit that is taking place in the USA courts against multi-national corporations that did business with the apartheid South Africa.

A Boipatong Memorial and Youth Heritage Centre dedicated to the freedom struggle veterans is being built and about to be completed. This centre was commissioned at R40 million by the then Gauteng Province’s Department of Public Works, Roads and Transport now called Department of Infrastructure Development (DID). The private sector contributed a larger portion of this R40 million, a consortium responsible for the construction of Gautrain.

This construction of this memorial project created a number of jobs and provided skills training to members of the community.